Last evening a few hours after i posted about the Jatra and mentioned my Dad’s gracious cousins who hosted us, one of them died.  I will simply call him Kaka for this post. Kaka means Dad’s brother.  Here even a cousin is a brother or sister. Suddenly Death was real and alive and in our home and hearts.

The news came suddenly like it happens often times. We were sitting and drinking coffee around my parents dining table in their Bangalore apartment. Raghu and i were playing Pictionary. Raghu had started a new personal game as we played Pictionary. He would role a dice and assign actions to each number. So he would say (to himself) if I roll 4 I will eat a spoon of corn, if I roll 6 i will draw, if I roll 5 I will stop playing, etc. It was slowing down our game but was funny to watch.  He kept taking decisions all thru the evening based on a roll of dice.  And in the middle of this slow evening came a call.
The voice on the other end sounded distraught and mixed up.  Slowly over a couple of calls within a few minutes we all knew that Kaka had died. It had taken his older brother and hospital authorities an hour to start the inevitable process of declaring the death.
As the evening wore on and my dad got ready to leave for Huballi, i found Raghu crying alone in his room. I sat and massaged his legs. We talked about how everything is energy. How we get attached to so many things in our lifetime.  We spoke of life, living and the need to move on.  Some call upon death, some can keep death at bay. I told him of my Dad’s grandmother waiting for 3 days on her deathbed for him to arrive. Within a few minutes of his arrival she died. Raghu felt Kaka’s death acutely for a while.  He had just met Kaka and had chatted with him.  The sudden death left Raghu bewildered, sad and wondering about how life can change in a split second.
Raghu also shared with me that Kaka had asked him to create a presentation on the Agnihotri family. He wanted my help to create this. My dad and i were quite moved by his earnestness. And i wondered about that dice game, the roll of dice, chance and the apparent randomness of life.
Rest in peace dear Kaka.  Ravi and I will remember your joyful presence and immersion in Hindu rituals, your sincere smiling presence and total immersion while conducting a pooja, and the conversations we enjoyed at Dharwad during the Trust meetings. Raghu and i will create a beautiful something, that reflects the Agnihotri history. 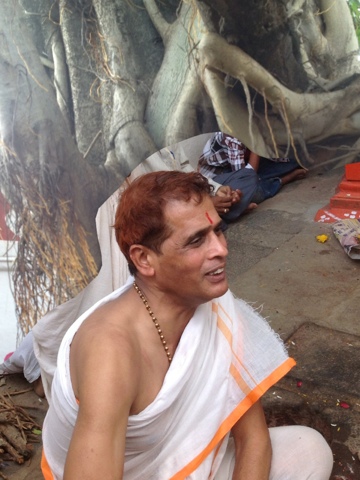 2 thoughts on “Death and Eulogy”